Smart solutions for security cameras across OS, protocols, and categories.

Generate your branded retail mall and monetize your traffic.
Partners

Following Amazon's release of the Echo Show and its access function to smart cameras, Tuya Smart's camera team has taken large strides in the development of this new security solution, allowing camera manufacturers with low R&D abilities an easy access to Echo Show. 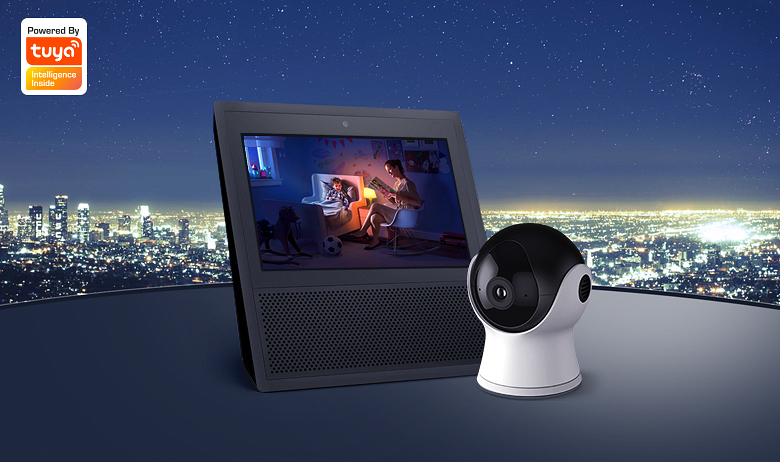 After Siri has introduced the smart voice assistant, Amazon has been attempting to expand this concept into our homes through Echo. With Echo, people can control smart devices, play music and shop online via voice, an idea also pursued by Google and Apple.

This June, Amazon has introduced a new product named Echo Show. It is equipped with a 7-inch screen, designed around Amazon's voice assistant Alexa, and aims to enhance the perception and visual performance while strengthening the Echo device's communication ability with other devices.

Between physical control and smart phone "app" control, people are increasingly preferring to control their smart devices with voice and visual interaction, therefore making this newly released product popular in North America and Europe. Many Echo customers have remained loyal and bought the new Echo Show after experiencing the smart voice control with Alexa. European and American markets contain a greater number of "smart homes", in effect, causing greater demands and expectations for visual interaction products.

Currently, there are only a few video camera models which are compatible with Echo Show globally. A normal smart camera is priced at about 60 dollars, but with the function of access to Echo Show, most of these cameras are over 200 dollars. However still, customers are not detracted by the price tag and still willing to pay for such products.

Seeing the potential in this market, camera manufacturers all over the world are diving into the research and development of this field. The access to Echo Show requires excellent hardware performance, a mature cloud service system and vast experience in Alexa development. Unfortunately, there are only a few products that have met such requirements and this field is still relatively undeveloped in China.

With access to Tuya Smart's platform, camera products can also gain access to Echo Show within a few days, which will greatly strengthen their competitiveness in overseas markets.

This is particularly helpful to the camera manufacturers with low R&D abilities. Firstly, the Tuya platform is charged in a one-time, lifelong, platform-based and transparent manner, therefore the manufacturers need not invest ten to one hundred times the funds originally required on technology development. Secondly, manufacturers can quickly release the finished smart cameras with access to Echo Show and greatly shorten the development period.

Up to early November of 2017, Tuya Smart products have covered 200 countries and regions including China, the United States, Europe, Middle East and Southeast Asia, serving over 10,000 clients across the globe and reaching millions of consumers. Tuya Smart receives daily Device Requests of over 20 billion times, daily AI interactions over 5 million times and its accumulated data has reached 1PB.

Privacy PolicyTerms of UseCalifornia Privacy NoticeBug Bounty
© 2021 Tuya Inc.
Hi there! 👋
Ask us anything, or request a demo
REQUEST A DEMOONLINE SUPPORTSERVICE: 844-672-5646